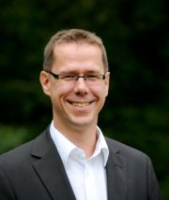 At the NANOCON´17 conference Prof. Stephan Barcikowski will present the invited lecture at the Session C - Bionanotechnology, Nanomaterials in Medicine.

Biography, Education and Employment:
Stephan Barcikowski studied chemistry in Braunschweig and Hannover, and made his PhD in Mechanical Engineering (Materials) in 2004. At the Laser Zentrum Hannover, he built up the Nanomaterials group, and later led the institute´s Materials Processing Department. In 2010, he co-founded the company Particular GmbH. Since 2011, he chairs the Institute of Technical Chemistry I at the University of Duisburg-Essen and he is scientific director of the Center for Nanointegration Duisburg-Essen CENIDE since 2015. He serves editing the Journals Applied Surface Science, Scientific Reports, and BioNanoMaterials.

Publications:
Author of more than 500 scientific publications on nanomaterials and laser processing, including more than 1502 reviewed papers and patent files. He launched the scientific video channel “nanofunction” on youtube with more than 11,000 annual visits.