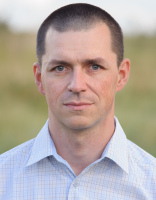 Institute of Physics of the CAS, Prague, Czech Republic, EU

Personal Background and Education:
Lukáš Palatinus studied mineralogy and geochemistry at the Charles University in Prague. He obtained his doctoral degree in Bayreuth, Germany for his work on the application of maximum entropy methods to structure analysis of aperiodic crystals. After a short stay at the Institute of Physics of the Czech Academy of Sciences (ASCR) Dr. Palatinus spent four years as a post-doctoral fellow at EPFL in Lausanne, Switzerland, where he worked on the development of the charge flipping algorithm. After his return to Prague in 2009 he started working at the Department of Structure Analysis of the Institute of Physics ASCR, where he became the leader of the group of electron crystallography.

Research Areas:
In the early years of his carrier Dr. Palatinus worked mostly in the field of the structure analysis of aperiodic crystals. He developed the computer program Superflip for the solution of the crystallographic phase problem for both periodic and aperiodic crystal structures, and developed a novel method of determination of the space group symmetry based on the results of the charge flipping algorithm [1,2,3]. After his return to Prague, Dr. Palatinus and his team focused on the structure analysis of nanocrystals using electron diffraction methods. The development consisted of the combination of suitable data collection procedures, novel data processing and the development of new software for more accurate analysis of electron diffraction data [4,5]. All these tools were combined with or implemented in the crystallographic computing system Jana2006 and made thus available to the broad scientific community. Method has been developed to the stage that permits determination of crystal structures from single nanocrystals with unprecedented accuracy and reliability [6].

Publication Activity:
Number of articles in IF magazines: 76, number of citations: 3493, h-index: 21

Honors and Awards:
Dr. Palatinus was awarded the Erwin Felix Lewy Bertaut Prize of the European Crystallographic Association in 2009, and the prize for young scientists by Neuron – the Fund for Support of Science in 2017.